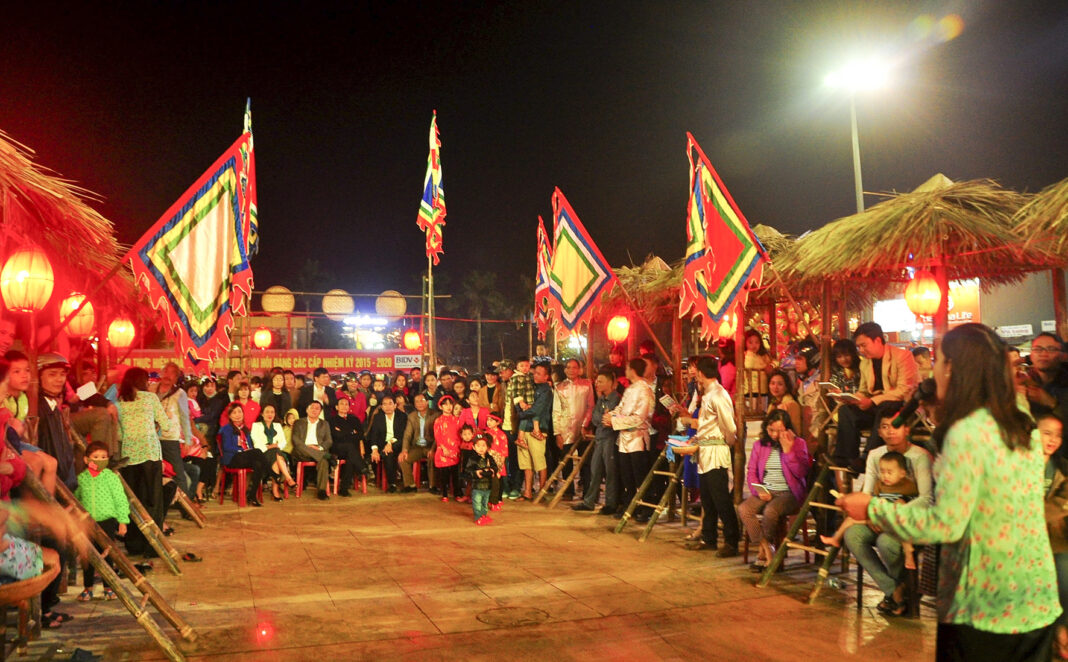 Bai Choi is one of the theater performances, full of improvisation and widely enjoyed by most audiences.

The art of Bai Choi

Bai Choi was recognized as Vietnam’s national intangible cultural heritage by UNESCO in 2017. The art of Bai Choi in central Vietnam appeared hundreds of years ago, originating from the habit of locals during the reclamation period.

At that time, locals usually built huts in the fields to protect flowers and vegetables from wild animals. Inside each hut, there are instruments like wooden bells, drums, and locals used them to make noise and drive predators away. And the art of Bai Choi was formed as entertainment. Today, Bai Choi is still a famous game in central Vietnam.

Playing Bai Choi is simply sitting in a hut and playing cards. But not only a card game, it is an art performance of the actor in the role “anh hieu” (MC).

Talking about Bai Choi, there are 4 words that players have to remember. The folk songs are actually based on poems and do not have a key melody. Instead, the melody mainly depends on the rhythm of poems, which is divided into 6 types: Xuan Nu Co, Xuan Nu Moi, Co Ban, Xang Xe Cu, Xang Xe Moi, Ho Quang. The MC randomly sings out loud a folk song representing each of the cards.

To organize a Bai Choi game, the first thing to do is to build huts. Nowadays, building huts has many changes, with one hut for “anh hieu”, and the others placed beside or around the area for the players.

The way locals of different regions organize Bai Choi is diverse but also common, from the hut design, costume, cards, “anh hieu”, music, reward, etc. Each player will select 3 cards to start the game. The cars, pasted on bamboo sticks, are engraved with objects, human figures and animals. Each card corresponds to a particular song. A player sings a song and the MC will listen and ring the bell if the song is corresponding to the image of the card.

The traditional Bai Choi is an entertainment existing for a long time. In Bai Choi, winning and losing are not important, and that is why this game has become a unique cultural art and developed significantly.

Today, in the region between Quang Nam and Binh Thuan, we still hear the sound of locals playing Bai Choi. Some locals even join a team or a group to perform in other areas.