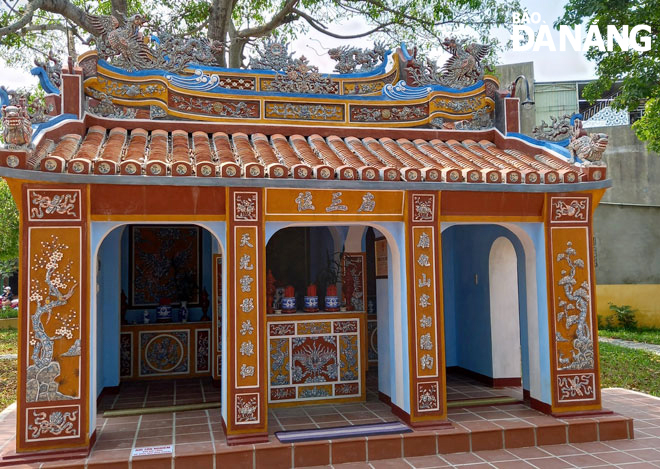 From a long time ago, Hoa Phu village (located in Hoa Minh ward, Lien Chieu District, Da Nang city nowadays) has stayed a shrine for worshiping 3 generals of Dai Viet who died a sacrificial death in the conquests of Chiem Thanh. This village is not just a cultural spiritual place but also a proof of a long-standing one.

According to the elders, Hoa Phu village was formed in the very early days. All the predecessors who did the expansion and settled the village originally came from Thanh Hoa and Nghe An provinces. As stated in the book “Lich su dau tranh cach mang phuong Hoa Minh – giai doan 1930-1975” (A history of revolution in Hoa Minh from 1930 to 1975), three villages were established in the area, including Trung Nghia, Hoa My, and Phu Loc. Especially, Trung Nghia village was set up in 1643.

Afterward, another married couple Mr.Pham Cong Nhut and Mrs.Nguyen Thi Van came and contributed to the formation of the village. Back then, Phu Loc village had 10 small hamlets, consisting of Ha Nam, Phu Ca, Phu Trung, Hoa Binh, Phu Xuan, Phu Thanh, Tay Sa, Go Dau, Bac Ninh, and Quan Com. During the French colonial rule, the Nguyen dynasty conceded by cutting off Quan Com and Tourane to the French. Phu Loc village then only had 9 hamlets left and was renamed to Hoa Phu.

Mieu Tam Vi (The shrine of the three)

Pertaining to Hoa Phu village is a folk story. The place is said to be a desolate and dense coastal forest back then. The population was sparse, people mainly lived on cultivating wet rice, hunting in the forest, and fishing from the sea. Alongside Hoa Phu formation, the villagers built the communal house and worshiped the gods such as Thanh Hoang, and their ancestors there.

The communal house was used for worshiping 9 superiors: Cao Cac, Thai Giam, Ba Chua Ngoc, Ba Thuy, Ba Ngu Hanh, Hac Ho, Khong Tu, Lao Tu, and Dao Tu. Among them, Cao Cac was a general during the Dinh dynasty. Dinh Bo Linh stood on his shoulder in suppressing the anarchy of the 12 warlords and establishing the Dai Co Viet. He was also involved in the Chiem Thanh conquest and was likely to give a helping hand to people in need wherever he crossed by.

The birth of Mieu Tam Vi in Hoa Phu village also started from an ancient folk story. The story began when the plague of the Chiem Thanh army descended on the land day and night. They messed around, making people feel threatened. In that situation, the king commissioned three generals of Dai Viet to expel the enemy. They fought a brave battle but unfortunately, none of them came home alive. The villagers held the funeral and buried the generals in a forest near a fishing village located in the southeast of Hai Van range, which is Hoa Phu village nowadays.

After Chiem Thanh’s army had fled, the area was at peace again. The sacrifice of the generals and where they were buried were reported to the king. Mourning for such brave people who died from the country’s mission, the king commanded the building of a shrine for them and honored them as “Tam vi tang dien son ton than” (Three gods buried in the forest). The general who held the highest position among the three was known as “Thuong dang than” (The archangel), while the other two were “Trung dang than” (The angels).

Legend also has it that the three generals had fought and died in the forest near Hoa Phu village since Tran Nhan Tong majesty married his princess Huyen Tran to the king of Chiem Thanh, who was Che Man, in exchange for O and Ly regions. The incident occurred in 1306, until king Le Thanh Tong acquired the 13th region, Quang Nam, in June 1471.

As time goes by, the shrine now is called Mieu Tam Vi. Each year, on the 24th of December according to the lunar calendar, Hoa Phu villagers hold the death anniversary for the sacrificed generals right at the shrine. To have the budget for making it happen, the mayor hosts a village gathering and decides to use about 7-8 arable land parts for special cultivating. The farm produce will then be sold or traded for meat. The earned money is used for holding the anniversary and worshiping Thanh Hoang (The god of the land) of the village on the 13th of January.

Being through a long time, Mieu Tam Vi has been repaired many times but still maintains the original set-up. The center is for “Thuong dang than”, while in front of it are the two smaller shrines facing each other for “Trung dang than”.

During the war, Mieu Tam Vi served as the meeting place of Trung Nghia – Phu Loc Party. This is also where Da Nang Party aldermen and the committee of the central region used for communication. On 28th April 2020, the Chairman of Da Nang People’s Committee signed the administrative decision no.1523/QD-UBND about making Mieu Tam Vi one of the city’s historic sites. To preserve the heritage, The Department of Culture, Sports, and Tourism ran the repair process for the shrine and completed it in January 2022 with a total area of 750m2.