DA NANG – THE CITY OF BRIDGES

Da Nang, a well-known beach resort city in Central Vietnam, is home to some of the world’s most stunning beaches. Or with the unspoiled natural settings like Hai Van Pass, Son Tra Peninsula,… the bridges are one item that cannot be mentioned as one of the iconic images that symbolize Da Nang.

Immediately after Da Nang was placed under the direct control of the central government, work on the Han River Bridge began. The Han River Bridge, which took two years to build, was dedicated in 2000 and quickly became the locals’ pride.

Han River Bridge does more than only connect the Han River between its two banks. The old houses close to the sea are gradually being replaced by a succession of new infrastructure works that transform Da Nang’s appearance. This also serves as a bridge connecting the economy and development of the East and West coastlines.

Han River Bridge is the first swing bridge created and constructed by Vietnamese engineers and laborers. Furthermore, the government and residents of Da Nang worked together to build this bridge. Because of this, the Han River Bridge is not only a symbol of modernity and development but also a reminder of a trying time in the history of Da Nang.

Building a swing bridge serves the objective of facilitating ship movement. But it is no longer frequently utilized, nevertheless, because a new harbor has been built. But every night at 1 am, visitors to Da Nang can still enjoy the swing bridge’s moment.

In addition to the swing bridge, Da Nang’s Han River Bridge is one of the best places to view the sunset. Standing in the middle of the bridge, one can see the serene Thuan Phuoc bay and bridge on the left, the Dragon Bridge, the sun wheel, and the appearance of a busy metropolis on the right.

The major route running through the heart of Da Nang city is where you will find Dragon Bridge. With a distinctive design that shows a dragon in the form of a flowing river, facing the East Sea with its head raised high. This serves as the city of Da Nang’s architectural symbol.

The Viet Nam Bridges and Roads Association has named the design of the Dragon Bridge as one of the works with new and distinctive architecture that creates a specific inspiration for a city in transition. It produces shimmering color effects for the Dragon Bridge at night in addition to the current LED system.

There is a night market just next to the Dragon Bridge where guests can eat delicious local cuisines or appealing fresh seafood dishes. The yacht and the bridge of love are on the right.

Weekend activities here draw visitors from all over the world in addition to the fact that it is a unique architectural work. To add interest to the Han River Bridge, Dragon Bridge has fantastic water and fire performance every Saturday and Sunday at 9:00 p.m. Additionally, this is where events for Bai Choi culture and art, one of the Central people’s traditional sports, are held.

Thuan Phuoc Bridge is situated in a unique location where the Han River flows to the opening of Da Nang Bay, connecting the two pathways Nguyen Tat Thanh and Truong Sa running directly to the sea and making a stunning route connecting Hue and Son Tra peninsula.

One of Vietnam’s longest cable-stayed bridges, Thuan Phuoc Bridge offers panoramic views of both the busy metropolis and the peaceful seaside. Although Thuan Phuoc Bridge is not in the middle, the calm beauty of the Bay, which marks the start of the sea and the end of the river, still draws travelers there. Due to the outstanding backgrounds, checking in at Thuan Phuoc Bridge has become a need for tourists.

Here, “calm and romance” are the only words to describe the sunset. You will be far from the city’s center, where the afternoon’s bustle and the sound of car horns have disappeared, and you will be returning to the peaceful bay where you can hear the waves. During a particularly beautiful afternoon, romance by color. At the base of the Thuan Phuoc bridge, on the embankment, you can see the Bach Ma mountain range, Hai Van pass, and the Han River flowing into the sea as you watch the sun slowly set behind the mountains.

In the center of a wide river, Thuan Phuoc Bridge is beautiful and charming with shimmering lights that are modern but not overly complicated.

4. Tran Thi Ly Bridge – The sails stretch the wind to the sea

In 1950, France constructed Tran Thi Ly Bridge as a railroad overpass. However, the local administration reconstructed it in 2019 and gave it the new name Tran Thi Ly bridge under the influence of European architectural style.

The 3-way cable-stayed system and inclining pillars that give the Tran Thi Ly Bridge its unique shape make it the most interesting cable-stayed bridge in Vietnam. The bridge-like structure resembles a sail that extends out toward the ocean. That is the appeal of how tradition and modernity coexist.

Standing on top of the Tran Thi Ly Bridge, you can see all the remaining construction projects, including the Sunwheel, Thuan Phuoc Bridge, Song Han Bridge, and Dragon Bridge.

A must-visit location for food is at the base of the bridge. Both students and residents of Da Nang are highly familiar with this place for snacking.

Every bridge has made a significant contribution to the process of growing and developing Da Nang city and has a role to play in raising the standard of living for the entire city. Enjoy the beauty of Da Nang by going to these bridges! 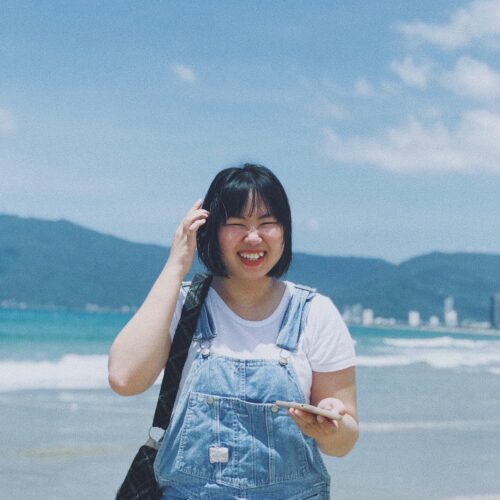