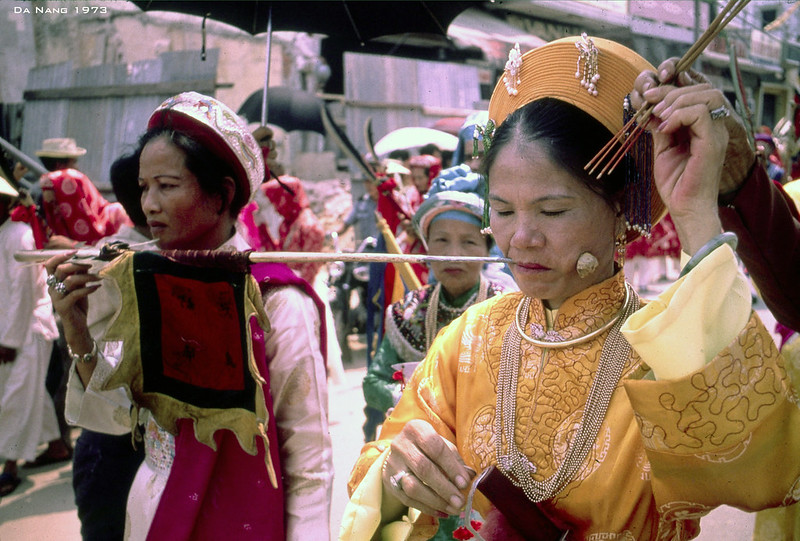 Linh piercing ritual: There are two styles of Linh piercing. In the first style, the main priest or priestess uses a metal rod (called “Linh”) to pierce through one of the cheeks, inside the mouth, and then they bite tightly with their teeth. One end will be lifted by the sub-priest or sub-priestess. The other end is attached with jade or young areca berries. Another style is to plug 2 small rods into both cheeks, then pierce them into the mouth, hang them upside down, and use a cloth string to fix them on the ready-to-wear turban. The form of Linh’s piercing is often associated with the religion of Saint Tran Hung Dao

When he returned to the field, the Saint often performed miracles to kill demons ( Only the Tran priest or Tran priestess has the ability to serve him). The accurate process of the ritual is “going into trance” which means holding the red silk strip tied around the neck of the main priest or priestess. Tied around the neck until their cheeks are puffy and turn red, which is the true ritual. At this time, the main priest or priestess has to skillfully hook a finger into the neckband to loosen it because the Saint only stays in their head and it does not mean the deities’ spirit enters the priest’s mortal body. After that, they cut their tongue with a knife or sharp object to draw blood (called a “salty mark” which is the Saint’s blessing mark) and spit it out over a sheet of paper or wine. Some people ask for it to bring it back to protect themselves from evil spirits. Other people who are harassed by evil ask for wine with blood and drink it to ward off evil. In addition, there are also other ways such as drinking boiling oil or heating the hoe and then putting your feet on it. Nowadays, these ancient forms are less common.

Due to folk beliefs, when there is an epidemic of evil spirits, people often pray to Saint Tran to kill and exorcise them, especially women with obstetric diseases. According to folklore, a devil called Pham Nhan causes these diseases in women. And Saint Tran was the one who beheaded this devil. In addition, there is a folklore story that if the invasive enemy comes, you have to go to the temple to ask Saint Tran for help. If you get the noise inside the sword case, it will definitely be a big victory.

Currently, the Hau Dong ritual is gradually losing its sanctity and being commercialized. The phenomenon of being fake saints appeared everywhere. It is a sad reality for Vietnamese traditional beliefs and culture.

The form of Linh piercing is often associated with the religion of Saint Tran Hung Dao. This is an ancient form of ritual, which is no longer common today.

Some pictures of the procession in Danang in 1973: