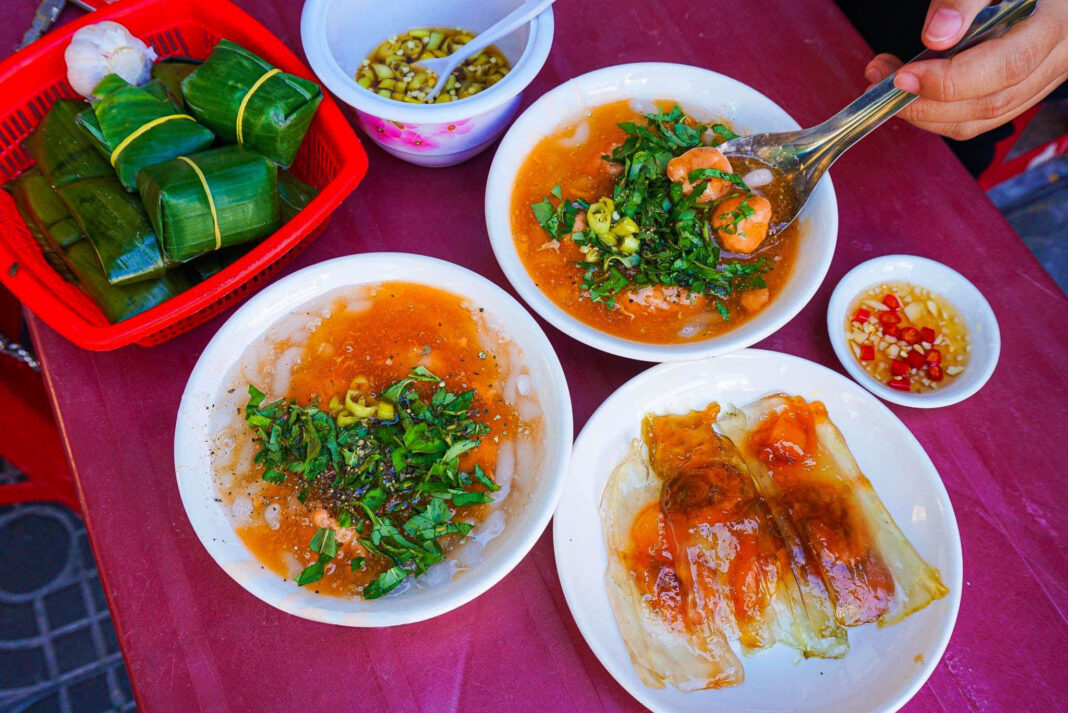 A small, idyllic place located on Trung Nu Vuong Street sells a specialty of the central region of Vietnam, the Nam Pho bread soup. From the tail of the Golden Dragon Bridge, it only takes 5 to 10 minutes on foot to reach this lovely stall, and you will have a chance to experience the unique taste of the bowl of hot soup from the first spoon to the last one. If you have a great day visiting a lot of Da Nang’s tourist attractions, why not stop by the stall for a little bit, relax and admire the vibrant downtown area while enjoying the traditional, delicious dish?

1. The origin of the unique dish – the Nam Pho bread soup

Anyone who has visited Da Nang, a stunning city that’s well worth visiting, cannot miss the Nam Pho bread soup, one of the most ordinary dishes in the central region of Vietnam. This is an heirloom dish associated with the childhood of many locals with a unique and delicious taste. This dish has originated from Nam Pho village in Phu Vang district, Thua Thien – Hue province for a very long time. After that, the people of Hue brought that unforgettable taste with a combination of mild-sweet, spicy, and sour flavors to Da Nang and quickly received enthusiastic support from the people here. Among all of them, there is the Nam Pho bread soup stall on Trung Nu Vuong Street, which is the most popular because of its original taste.

The small stall is located on the sidewalk next to the beginning of a small alley. There are only a few tables and low plastic chairs because it is mainly takeaway. However, because it is on one of the busiest streets in the city, the stall sells out quickly within 3 to 4 hours, especially on rainy days. Anyone passing through the stall cannot resist the alluring smell of the hot bread soup pot and has to pull over and enjoy their delicious bowls quickly, and so do we.

Having had a great chance to make small talk with the owner of the famous stall, we learned that she was born in Da Nang but her mother’s hometown is in Hue. However, the taste of delicious dishes that she has made a lot of effort to learn and find ways to process is not inferior to eating in Hue. She also adjusts the recipe to meet the needs of the Da Nang people. The noodles are a bit longer and bigger than in Hue, and the delicious broth is thicker. The stall also recently added fried pork skins to go with the soup, which is quite tasty. In addition, she also sells other specialties such as the Hue-style clear shrimp and pork dumplings as well as rectangular dumplings at super reasonable prices.

3. The taste of an artwork

The first thing that impressed us was that the broth here was thick with sticky flour strips and an eye-catching orange or brick-red color, along with the green of chopped laksa leaves. There were many toppings on it, including fried fish pies, steamed shrimp balls, and fried pork skins. We were immediately intrigued by the scent of its ingredients. Before eating, we added a teaspoon of fish sauce, a little chopped fresh red chili and pepper powder, and then squeezed a slice of lime on top of the bowl to our preference. These additional ingredients somewhat enhanced the great taste of the dish.

We are sure that you will not forget the first taste of the Nam Pho bread soup when enjoying it. As soon as you have the first spoon, you are delighted by the sweet taste of shrimp and fish in the soup, and the moderate-spicy taste. This mouth-watering dish was actually a work of art in terms of balance, not just in magical flavor but also in texture. Furthermore, we also ordered the Hue-style clear shrimp and pork dumplings and rectangular dumplings. The cakes were made of tapioca flour, which becomes clear and translucent when cooked. We really loved the nice fragrance of banana leaves covering them, the chewy layer of dough flour, and the seasoned shrimp with a strong taste.